We Love our Quince Orchard Family and Friends!

Tonight was the first game and home game of the season for Quince Orchard High School Football. Paul and I went and got our tickets early and it's a good thing we did since the line at 6pm was long..happy to not be standing in that. QO is predicted to be a real strong team for this year. In fact, we have heard rumors that people are moving into this district to be a part of this football team. The game started at 630 pm.

My impressions~ The football field, grasses, was the most beautiful I have ever seen. It was perfection. It kind of got messed up during the game from the plays, but oh man, who did the rehab to make it so lovely?!

The school is looking great..the Cougar Dome entrance, the flags out front, the cleaniness of the school, very nice. The Booster Clubs culinary treats didn't disappoint, by enticing us with their barbequeing smokey smells of the burgers, chicken, dogs, kielbasa w/onions/peppers. Pizza was available too, but by the time we went to get some just after half time, they were sold out. :(

The band has new uniforms which are really chic! The flag girls too, and they are impressive. We played Clarksburg tonight, and they had powder blue and white uniforms which really stood out at super glamour too.

We especially always love seeing the Poms, and interestingly enough, at halftime of the game, when you would expect the crowd to go to get food, bathroom breaks, etc, nobody around us moved! The band and the Poms had everyone glued to their seats for the anticipation of the not disappointing and very entertaining show!
The football team seemed right on their game! Score was 21-7 at halftime. The Poms had a beautiful performance, and the marching band with their new uniforms looked and sounded awesome!

We had so much fun there tonight! 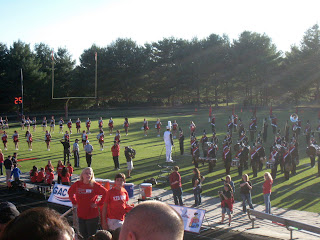 Posted by Life is good...except for sometimes. at 1:57 AM No comments:

A night out in Rockville Town Center with one of our Favorite Mortgage Brokers. 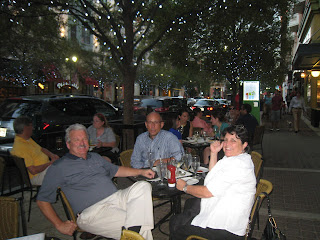 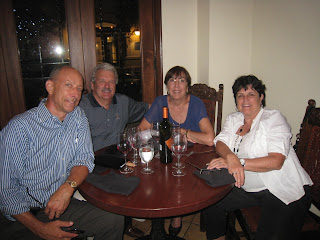 We rarely do Happy Hours (unless we are on vacation) but we hadn't seen our friends in a while and it was such a gorgeous day weather-wise yesterday that we took the opportunity to meet up in Rockville Town Center with Brice and Michelle Halbrook. People were all around enjoying the end of summer temperatures, breezes, and food and drink specials with their friends. Little children were playing in the fountains in their underwear and bathing suits. We ended the evening choosing Peruvian food and it was a gourmet feast.

If you are thinking of looking for a new home and would like to be in touch with a trusted, reliable and honest mortgage broker, give Paul a call and we'll put you in touch with Brice.

Posted by Life is good...except for sometimes. at 8:24 PM No comments: