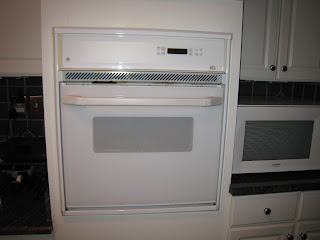 My house was built in 1995, the last house that was built in the Quince Haven neighborhood in Gaithersburg, or North Potomac MD.  We are the second owners, and have done some updating since we moved in, but our wall oven was the original.
Last month, after preheating the oven, I put some vegetables in the oven to roast, and continued making supper. Moments later, I was surprised by a bright light coming from the oven. Luckily, I was just steps away, because there was a flame in there burning around and on the element about 6 inches high!!  I grabbed my baking dish out of the oven quickly, and the flames rose higher. I quickly closed the door..and the flames continued.  I turned off the oven, and the flaming continued.  I threw some flour on the flames- bad idea...that stuff burns.
First of all, I knew that the fire wasn't caused by grease or dirt in the oven, because my oven was quite clean. Not perfectly clean, but there were no drips or spills and I had cleaned the oven recently.
The fire kept burning, and I quite frankly was getting in a panic because I wasn't sure where this fire might lead to. The fire started on the right side of the lower burning element and was traveling around the shape melting the metal and the sheath it was encased in. The door was closed but this fire wasn't slowing down.
Luckily I wasn't home alone and my daughter's boyfriend ran downstairs to the basement and found the fusebox...he didn't know where it was but me in my panic must have given him ok directions, and he found the fuse switch for the oven and turned it off.  Finally, the fire went out.
I don't know who marked our fusebox so well with each and every switch- maybe it was the engineer who lived in our house before us, but I am most grateful that everything was so well labeled.
If your fusebox isn't labeled well, I would suggest someday soon, before you need it, that is a project well worth its time to do. The other suggestion is not to leave an oven or stove unattended...who knows what may have happened with the fire if no one noticed it. Make sure smoke alarms are working too.
Below are photos of the meltdown and our response when I contacted GE about the fire. The fire began at the red pen and finally went out when it reached the blue pen, when the electricity was turned off to the oven at the fuse box. 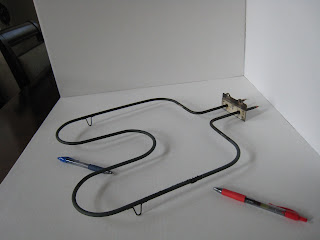 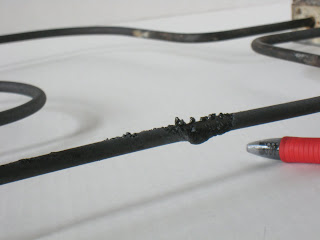 I emailed GE and they said they are sorry it happened, and gave me the phone number of a GE repair service.  I called the service and made and appt. and they said it would be $99 to come to the house, plus parts and labor, with the $99 deducted from the final bill.  I cancelled the apt. cause why would I want to spend who knows how much on repairing an oven from 1995. 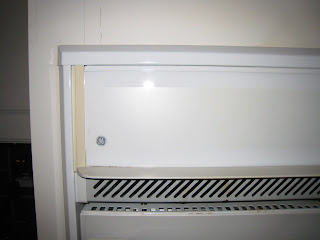 I emailed GE with photos, complained, and they said they will waive the $99 service call house fee, or would I like a $50 client rebate certificate, because they value my business.  What do you think?  Wall ovens are expensive ($1000+-$3000)..I'm researching them right now.  Meanwhile, I did "google" GE oven fires, and I see that I'm not the only one this has happened to.
Posted by Life is good...except for sometimes. at 9:44 PM